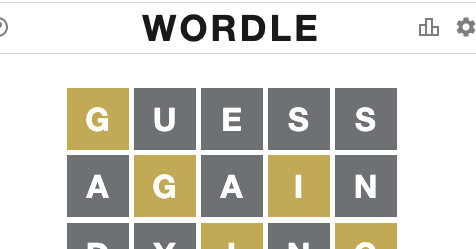 What’s a five-letter word for the best reason to buy the hugely popular and free online guessing game Wordle?

Well, that would probably be MONEY, but for now, the New York Times, which announced on Monday that it had purchased the game in a “seven-figure” deal, says it will keep Wordle free as it transitions to new ownership. But a close reading of the language used by the subscription-only online publication in this claim reveals a bit of subtlety that seems to hint that free access may not last.

“By the time it moves to The New York Times, Wordle will be free to play for new and existing players, and there will be no changes to its gameplay,” according to a Times press release.

If you haven’t seen or played it, wordle gives players six tries to guess a five-letter mystery word via a website that updates the puzzle daily. The simple, gridded interface shows the correct letters and locations for each guess. Everyone plays to guess the same word, and Wordle also provides a progressive tally of each player’s stats.

Brooklyn software engineer Josh Wardle released the guessing game in October 2021, according to the Times. Wordle exploded in popularity and quickly became a daily obsession for solvers. Ninety people played the game on November 1. Nearly two months later, 300,000 people have played it. Now the puzzle has millions of daily players.

And the game’s origin can be traced back to a couple looking for ways to kill time together during pandemic-induced home isolation.

In a January 3 story from The Times, Wardle said he first created a similar prototype in 2013, but his friends were unimpressed and he scrapped the idea. In 2020, he and his partner, Palak Shah, “really got into” The New York Times Spelling Bee and daily crosswords, “so I wanted to come up with a game that she would enjoy,” he said.

The breakthrough, Wardle told The Times, limited players to one game per day. It reinforced a sense of scarcity, which he says was partially inspired by the Spelling Bee, leaving people wanting more, he said.

“If you’ve followed Wordle’s story, you’ll know that New York Times games play a big part in its origins, and so this step feels very natural to me,” Wardle said in a statement. “I have long admired The Times’ approach to the quality of its games and the respect with which it treats its players. Their values â€‹â€‹are aligned with mine on these issues and I am delighted that they are guardians of the game. in the future.

For millions of its past and present readers around the world, The New York Times probably needs no more good faith when it comes to the puzzle business, having achieved its own benchmark success with its pun. namesake daily crusader. And the Times offered that reminder of that success in Monday’s press release.

“New York Times games have captivated solvers since The Crossword launched in 1942,” The Times wrote in its press release. “Our experts create engaging word games and visuals – in 2014 we launched The Mini crossword, followed by Spelling Bee, Letter Boxed, Tiles and Vertex.

“Our games were played over 500 million times in 2021, and in December we hit 1 million game subscriptions.”

According to his websitea subscription for unlimited access to The Times’ current portfolio of games will cost you $5 per month.

Jonathan Knight, chief executive of The New York Times Games, said he was a personal fan of Wordle and noted that The Times is dedicated to ensuring a bright future and wider audience for the game.

“If you’re like me, you probably wake up every morning thinking about Wordle and savoring those precious moments of discovery, surprise and fulfillment,” Knight said in the Times statement. â€œThe game did what so few games have done: it captured our collective imagination and brought us all closer together.

“We couldn’t be more thrilled to become the new home and proud stewards of this magical game, and are honored to help bring Josh Wardle’s beloved creation to more solvers in the months to come. As part of our game portfolio, Wordle will have an exciting future with the help of a talented team of engineers, designers, editors and more, enhancing the user experience.