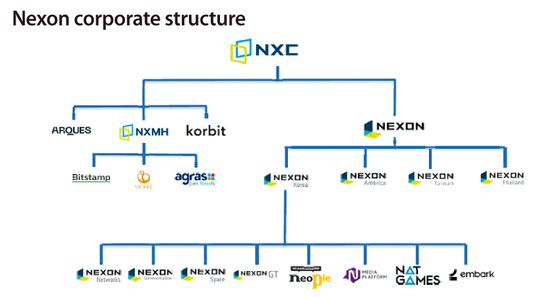 Kim Jung-ju’s death may have little impact on the fate of Nexon, the company he founded decades ago.

As the game maker is professionally managed and has a strong corporate governance structure, it can continue to operate uninterrupted unless the founder’s beneficiaries make big moves.

At the time of his death, Kim owned 67.49% of the shares of NXC, which controls Tokyo-listed Nexon. Nexon wholly owns Nexon Korea as well as other Nexon units in the United States, Taiwan and Thailand.

Kim was chief executive of NXC for 16 years, until stepping down in July 2021.

Founded in Korea and listed on the Tokyo Stock Exchange in 2011, Nexon posted revenue of 274.5 billion yen ($2.38 billion) last year, down 6% year on year. Its market capitalization was 2.46 trillion yen on Tuesday.

NXC owns 47.4% of Nexon and is its largest shareholder.

Neople, a wholly-owned subsidiary of Nexon Korea, launched the original PC-based Dungeon Fighter Online in 2005 and was acquired by Nexon in 2008. Since its introduction in China in 2008, the game has gained a lot of traction, establishing a record 6 million concurrent users last October.

Nexon Korea owns 63.16% of Nexon GT, the developer of Sudden Attack, an online first-person shooter. Nexon acquired Gamehi in 2010, which changed its name to Nexon GT in March 2014.

Subsidiaries owned by NXC include Norwegian baby accessories manufacturer Stokke. Founded in 1932, the company is the global industry leader in baby and children’s products, particularly strollers. The company was acquired by NXC in 2013 through its subsidiary NXMH.

Kim was ranked Korea’s fifth-richest person by Bloomberg last September, with an estimated net worth of $6.1 billion.

The company has stepped up its investments in an effort to combine its gaming and video content to establish a connected ecosystem of intellectual property. A recent example is Nexon’s $400 million investment in AGBO, a film production company co-founded by “Avengers” directors Joe and Anthony Russo, in January 2022.

When Kim stepped down as CEO of NXC last July, he remained on the company’s board.

Kim prepared to put his NXC shares up for sale in 2019, but quickly scrapped the plan. In 2018, he pledged to donate 100 billion won and not pass his business on to his children.

Kim’s wife will have the final say on his actions, but little is known about her and her intentions. Yoo has worked with Kim and Song Jae-kyung, the co-developer of “The Kingdom of the Winds”, since 1994 when the company was founded, but has rarely made public appearances and has not been directly involved in the affairs of the company.